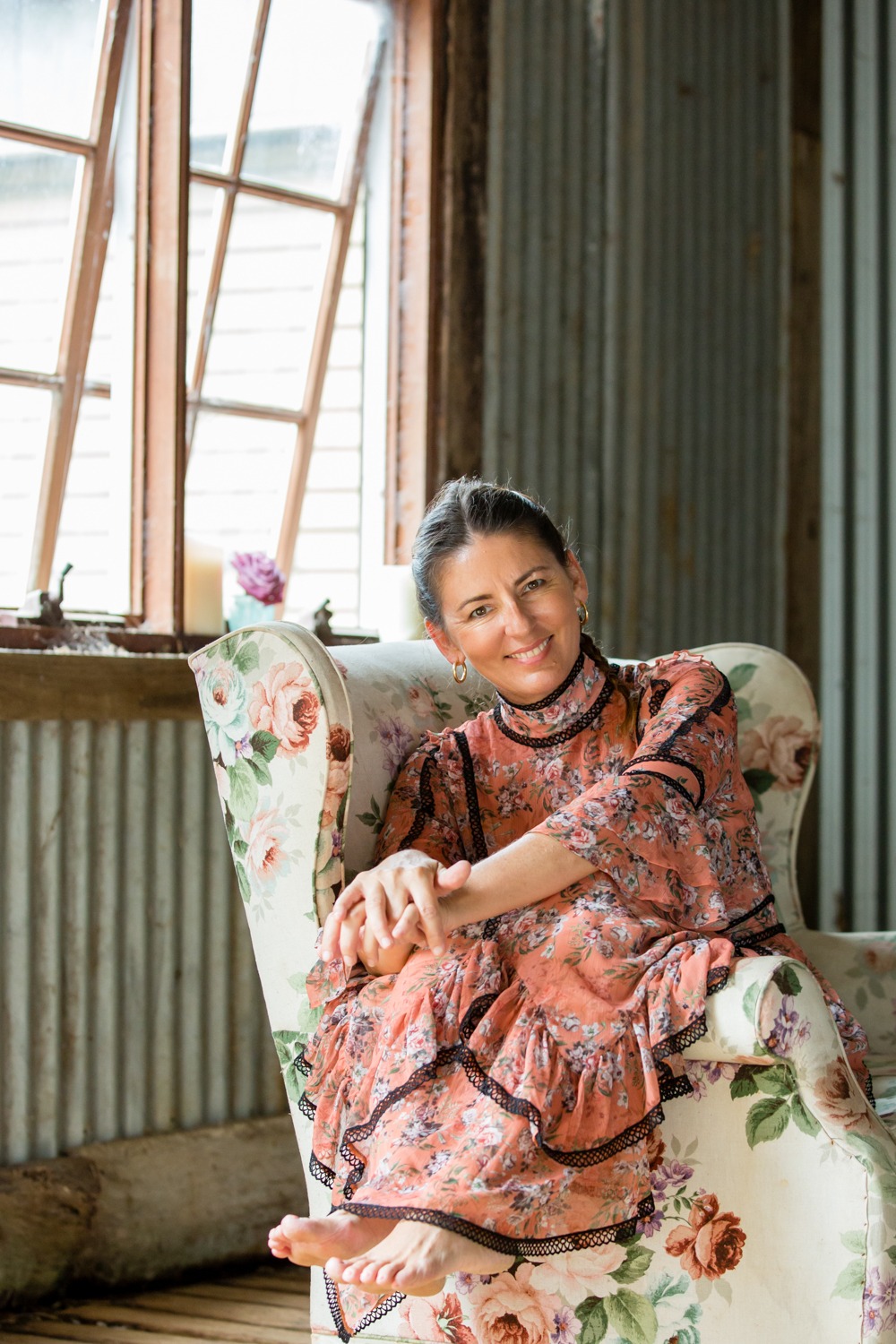 “I have manifested my whole life ”

Stylist and interior designer Shannon Fricke (5o) appeared in just about every leading interior design magazine and hosted the successful tv-program Home for years. Meanwhile, she became the mother of two children and wrote three interior design books. She is now co-owner of the store The Merchants and starts her day with a swim in the sea and a café latte. How did she manage to do all of that? Good question.

In addition to talent and the right attitude towards work, didn’t you just have a big stroke lot of luck?

Shannon: “Ha, I’ve heard that before and to be honest, for years I  thought it myself. Until I looked back on my life and couldn’t exactly see where I had been more lucky than others. My father was an alcoholic and my parents split up when I was young. Together with my mother, I lived in a government-subsidized home, while my father slowly disappeared from my life. Not exactly a flying start. ”

Sorry to hear that. Fortunately, you have been able to give this a positive twist. How did you manage to do that?

Shannon: “I grew up with the idea that anything is possible. When I, for example, as a small child, shouted out that I wanted to hang upside down like a monkey in a tree for the rest of my life, my mother responded with: How wonderful! How are we going to make that happen? “Not that she thought I was actually going to do it, but by making it negotiable, I believed it was possible.”

She stimulated your fantasty!

Shannon: “Yes, and thát has been my luck, because if you can dream it, you can make it happen. Although it is at least as important that you truly believe that you deserve something. Otherwise you’ll send out the wrong vibrations and block your own manifestation. ”

Ooh. You’re just going too fast for me here.

Shannon: “It is an age-old wisdom, preached by prophets as like Jesus and Buddha and proven by the scientist Albert Einstein. Everything is energy. Not just you and me, but everything that goes into the cosmos. And that energy is constantly moving. When you now express a certain desire – literally give it sound – you create a vibration that, in return, has no other choice than to find a similar match in the universe to manifest itself. This is also known as the law of attraction. ”

Shannon: “Exactly! But that also applies to the opposite, negative attracts negative. Everything you give attention to resonates with similar words, thoughts and emotions in your environment. Your current situation is therefore the sum of everything that you broadcast consciously, but mostly unconsciously. ”

To take myself as an example: I am the one who is actually stopping the love relationship that I want so badly?

Shannon: “Yes, you probably give too much energy to what you don’t want, such as the lack of it or the fear of being left alone. This will block your manifestation. For that the same reason, for example, a desperate applicant will never be hired. ”

Although I am a happy single, as a fourty year old woman with a desire for a child, I do sometimes panic. How do I stop that?

Shannon: “Sometimes it helps to literally focus on something else. By going to the beach, meeting up with a friend, et cetera. These are relatively easy to create experiences, which make you feel better and increase your vibration. From this more positive state of being you gradually become more receptive to what you do want. ”

Are there any other ways?

Shannon: “Have you ever fully felt the emotions associated with this loss? When you allow it – actually pass through you – then you can let it go. Compare it to a baby who cries and then five minutes later crawls around laughing. Precisely because he does not suppress his emotions. It’s  difficult, because society teaches you that you have to be strong in order to survive. That’s why it is also so difficult to make contact with your true self, your soul’s desire.”

Uhm, why would I want to make contact with that?

Shannon: “Manifestation starts as a consciousness in the mind, with a thought. Only then is it is felt by the body. It is essential that this is a pure feeling coming from your true self, because your heart is the strongest generator of electromagnetic fields – no less than 6,000 times stronger than your brain. That requires a bit of humility and honesty towards yourself. What do you really need? What does your soul need? We are all ultimately here to learn something. ”

I think this is getting pretty complicated.

Shannon: “Haha, no it’s not. Let me explain. The world around you is a mirror. It projects whatever is going on inside of you. Just think of the law of attraction. If in your case you’ve never come across the One, then apparently there is still a part in you that can be healed. Maybe you are convinced that you aren’t good enough? Or beautiful enough? Then it is your ultimate goal in this life to learn to feel better about yourself, so that you can really let go of that desire. ”

But how do I know if my soul really needs something? For example, I would like to have a million euros in my bank account, but do I really need it?

Shannon: “Your intuition and your true self are constantly talking to you. We only forgot to listen to it. When you concentrate on a certain desire and it really belongs to you, you feel it in the most pure and happy way. For example, I may think that I want to be president of Australia, but as soon as I let this feeling come up, I feel sick and I feel a stab in my neck. ”

How do you recognize those feelings?

Shannon: “I write down a desire as detailed as possible or I start meditating, which does not mean that I will sit still on a mountain in India for three weeks, though. I don’t have time for that at all. You can also meditate while folding the laundry or going running. The point is that you turn inside and really feel what a certain desire does to you. ”

All right. Suppose: I feel superhappy with a certain desire. Then what?

Shannon: “Then you take action to realize that desire, such as following a course or reading a book. In the end, nothing happens by itself. If you have no idea where to start, like for example your desire for a love relationship, start by creating an easy experience that increases your vibration. Ultimately, it’s about getting an (energetic) match with your desire. To be clear: you do not know what the outcome of your manifestation is. You get the essence of it.”

The essence. That sounds a bit disappointing.

Shannon: “The opposite. It is exciting. Let me give you an example. I have never had the desire to become a tv personality, but I did want to be able to stand in front of the camera full of confidence. That desire came about twenty years ago when I worked as an assistant editor for the lifestyle magazine Cleo. I was regularly asked to say something in front of the camera – something I invariably declined because it was too confrontational. Until one day I was done with that uncertainty. I wanted to be proud of myself. Two years later I was invited to do a screen test for the tv-show Home and from then on the ball started rolling slowly.”

Why did it happen then?

Shannon: “I had just given birth to my second child and started working on my health like a madman. By choosing for myself and taking good care of myself, I gradually felt better about myself. All things that were essential for me to be able to stand in front of the camera full of confidence. And then I got a call. At first I kindly declined the invitation: i didn’t want to go on television.  Until I realized that I had created this experience myself and that this was an opportunity to be proud of myself.”

Shannon: “Haha, yes sometimes it’s a matter of minutes, but sometimes also of years. And sometimes the actual manifestation only takes place in your next life. It depends on the negative dialogue that surrounds your desire and to what extent you really want it.”

Did you say ‘next life’?

Shannon: “Of course it is up to you whether you believe it, but we are only passing through here to gain experiences from which we can learn to ultimately become (more) enlightened.”

I thought life was supposed to be a party.

Shannon: “We are all here to have fun and to love. We just don’t always succeed, because we are people with corresponding egos, emotions, needs and conditioning. The ultimate goal is to work ourselves through these struggles and experiences until we come to what all prophets and great thinkers? talk about on so many different levels: love. ”

And you all knew this as a child?

Shannon: “Haha, of course not. I could only label it and really understand it when I started to dive into it years later – by talking to people about it and reading books about it. ”

Did everything in your life actually go exactly the way you saw it ánd felt it?

Shannon: “No, I also asked for things that came from my mind more than they were in accordance with my soul’s destiny. For example I wanted to have a family, and I was fortunately given that – I have two beautiful children. But my marriage failed. It is my ultimate soul destiny to be able to stand on my own two feet as a free woman. ”

Well, that wasn’t what you signed up for?

Shannon: “That applies to a lot of women, but as soon as I have healed these wounds, I close the circle. And from that moment I can reconnect myself to love and stand next to a man as an equal partner. ”

So anything is possible.

Shannon Fricke is a renowned stylist & interior designer. She wrote the internationally published interior design books Sense of Style, Style: color of style and How to decorate. On the Australian Lifestyle Channel, she presented the Home design program for six years, which received an award. Today she runs her own line of houseware and bed linen and is co-owner of concept store The Merchants in Newrybar. Shannon is the mother of Inez and Johnatan and lives in Byron Bay.

Why I choose sustainable art

Not giving a f*ck